Nigerian women have encountered a number of problems while venturing into politics. There is large scale discrimination from the men folk, both in voting for candidates and in allocating political offices. More often than not, men constitute a larger percentage of the party membership and this tends to affect women when it comes to selecting or electing candidates for elections. Since men are usually the majority in the political party setup, they tend to dominate the party hierarchy and are therefore at advantage in influencing the party’s internal politics. 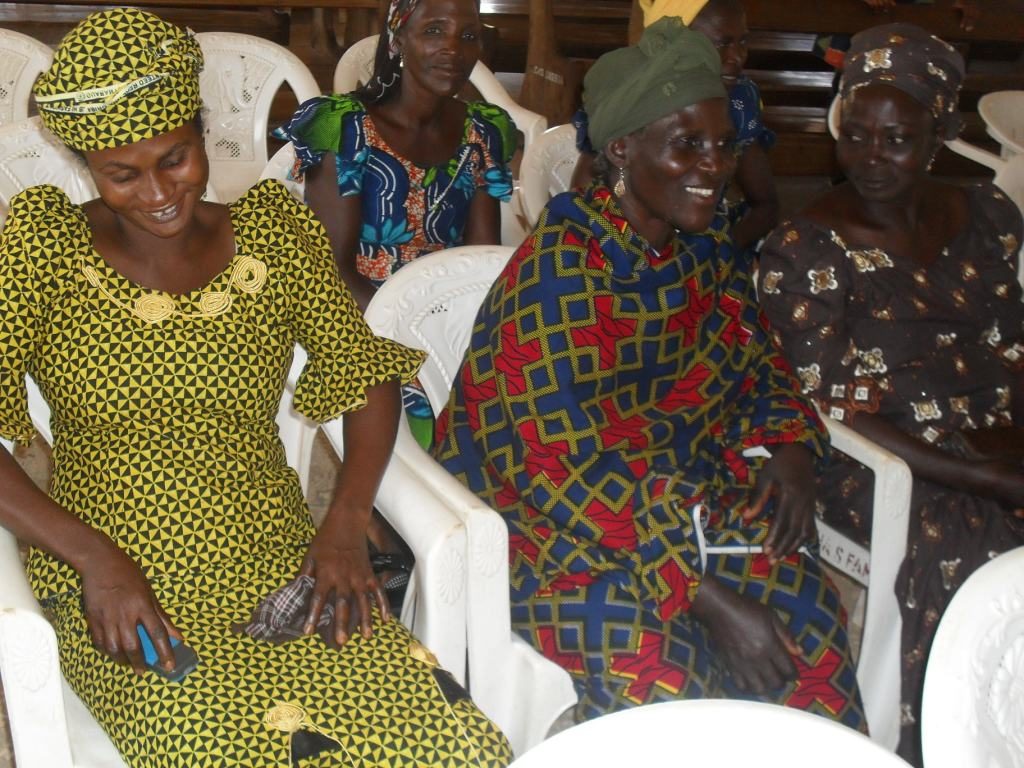 Women usually constitute a smaller percentage of political party membership because of the social, cultural and religious norms of the society which most often tend to relegate women to the background. As a result, only very few men, even among the educated, allow their wives to come out and participate in politics. In Northern Nigeria, for instance, an important factor inhibiting women’s participation is the purdah system (i.e. house seclusion of women).

There have been many studies carried out to understand the problems and prospects of women’s participation and the political process in Nigeria but we daresay not enough to highlight the critical role women can play in driving democracy as part of the electorate and how to leverage their unique placements within communities. 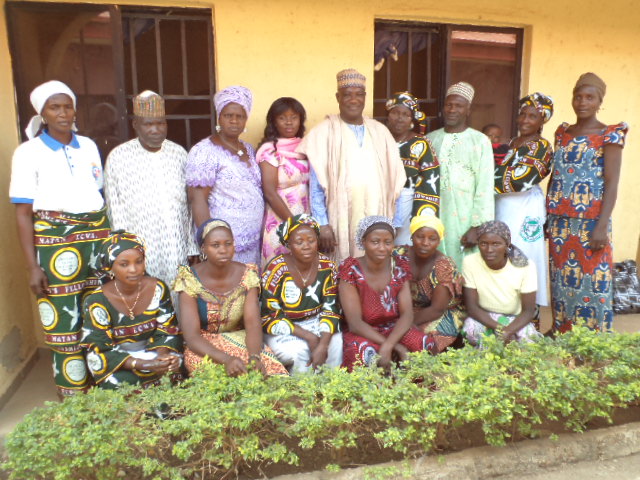 With an appalling record of women’s representation in both national and local politics, we are faced with an impending repeat of the status quo. For example, at the National Assembly, only nine out of 109 senators are women and at the Federal House of Representatives 27 out of 360 members are women. At lower levels, these statistics become even more discouraging – not one of the thirty-six governors in Nigeria is a woman despite women constituting almost half of Nigeria’s population.

Another problem facing women is lack of adequate education and risk related to education of girls in northern Nigeria.

Women constitute a larger percentage of the illiterate group in Nigeria. This could be attributed to the fact that in most families, parents prefer to send their sons to school, instead of their daughters whom they feel would eventually get married and thus get incorporated into another family. Thus, a larger percentage of the girls remain uneducated and unexposed to opportunities for education.

Lack of adequate finance is another crucial hindrance to effective female participation in politics in Nigeria. A large portion of the Nigerian female population is not as financially strong as their male counterparts. Family responsibilities and childbearing also hinder women from participating effectively in partisan political activities. During a sizeable part of their adult lives, most women are involved not only in child bearing, but also in child rearing. Thus, much of the time they may have wished to devote to politics is taken up by their maternal challenges and obligations. 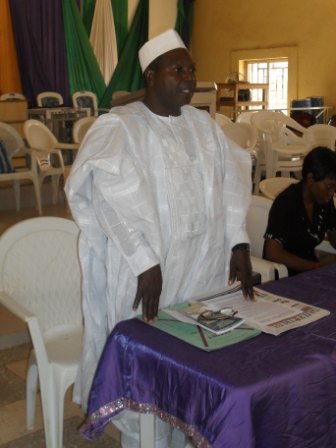 At both the national and international levels, there is a growing academic interest in the level of participation of women in politics. The ‘third wave’ of globalization emphasizes the issue of democratization, women and human rights which dominate world interests in Africa. African women, especially in Nigeria are exploited and marginalized. Despite the fact that women constitute about 49% of the total population, they are discriminated against in the political process.

The marginalization of Nigerian women is more pronounced in the democratization processes. Women in Nigeria constitute more than two – thirds of the country’s 70% adult non literate population while they hold less than 5% of the important decision making positions. The present national assembly in Nigeria has an appallingly low average of 0.05% of women in both houses.In order to change the tide new approaches must be taken, new strategies applied, and unexploited avenues leveraged.

This is a call to action to Nigerian women to make the 2019 elections count.

EWEI’s Civic Education and Participation for Women Project was designed as a means to address the under-representation of women and excluded groups in the political space, giving a voice to citizens’ concerns and encouraging participatory governance.

Other activities include the design and distribution of IEC materials and information dissemination using various media. CEPWOP contributes towards the achievement of SDGs 4 and 10 and has engaged 2,584 beneficiaries from 2008 – 2017. CEPWOP activities were supported by Open Meadows Foundation NY, USA  in December 2011. 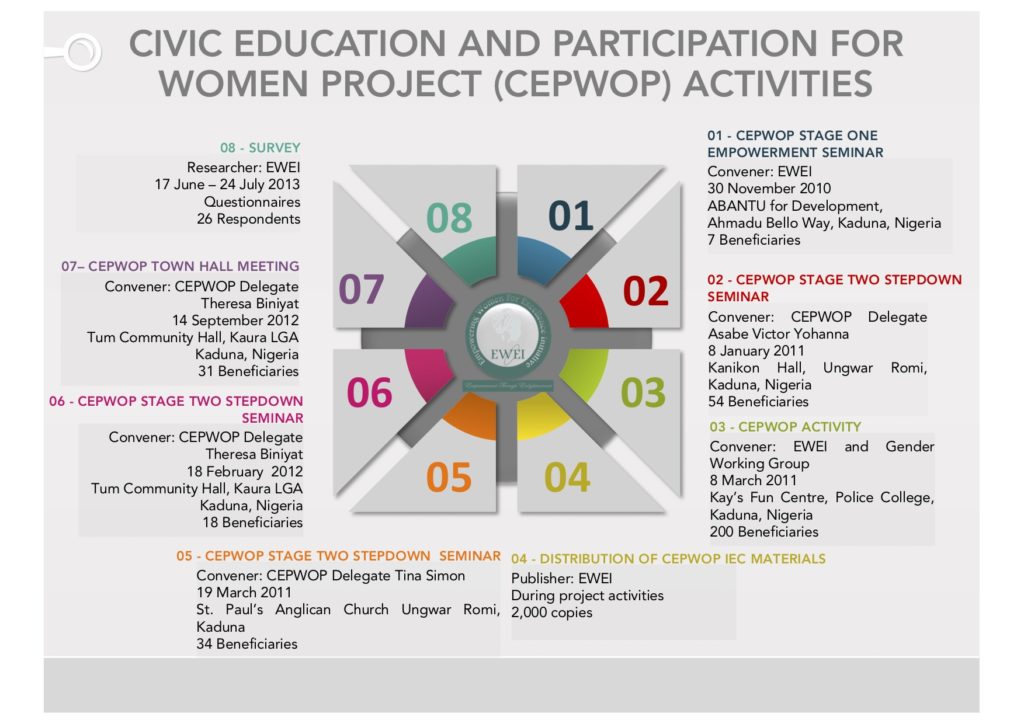 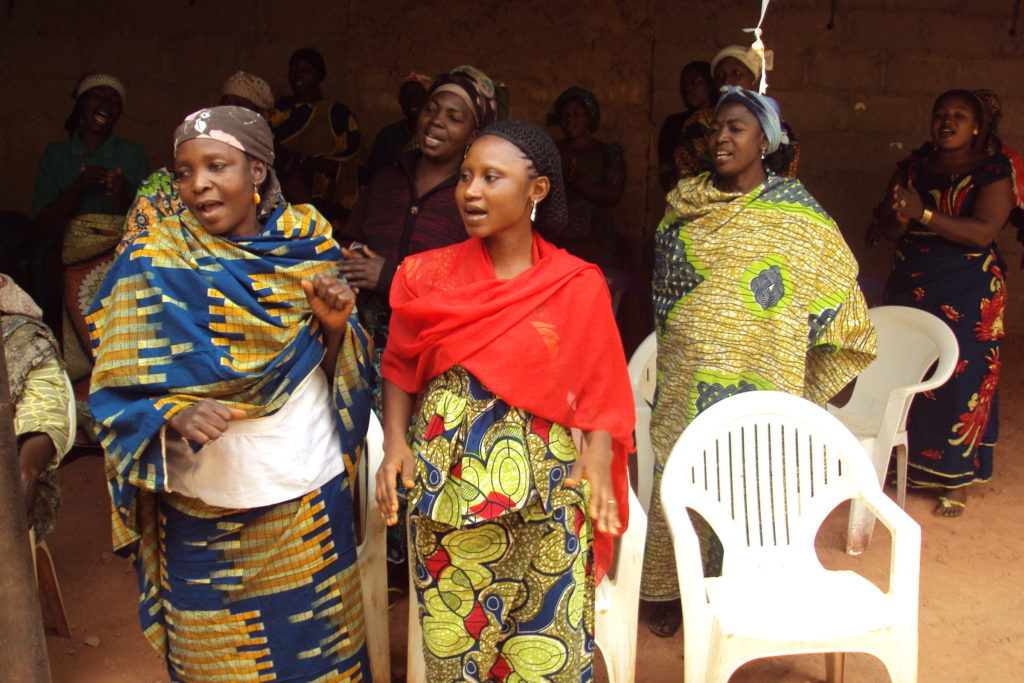 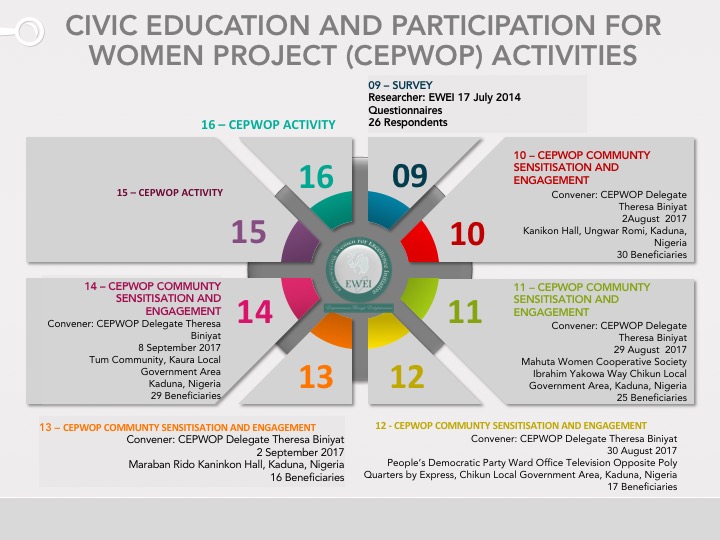 With the support of IntiRaymi Fund, CEPWOP activities for 2018 – 2019 include: 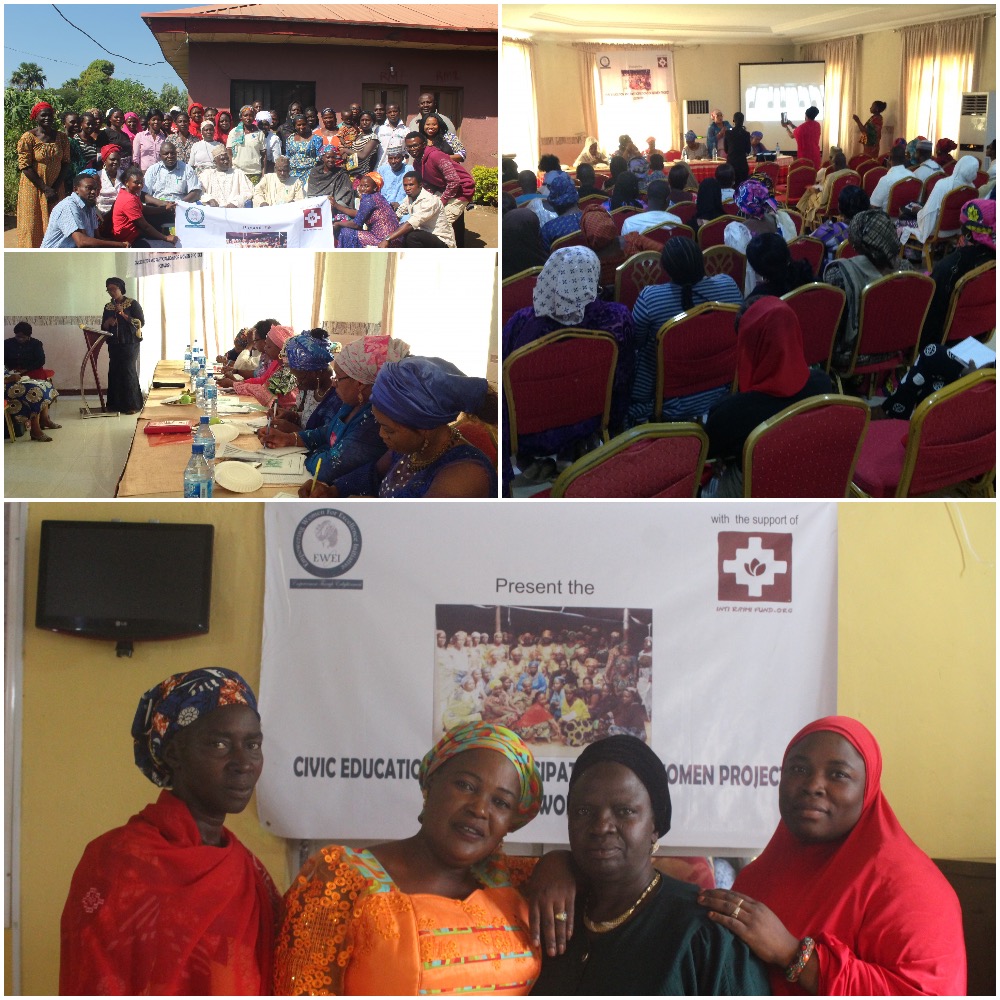 “Whatever is good for him is also good for Her”

“The pain of one woman, is the pain of all women. “I was enlightened and Impacted at the last #CEPWOP seminar so it is necessary for me to step it down to you all my fellow women in Malali community.

“As a woman, you have a voice and it needs to be heard”

Civic engagement remains a necessity for all, especially our #women and youth

“For me, a better democracy is a democracy where women do not only have the right to vote and to elect but to be elected.”

“From the first CEPWOP organized, I have learnt a lot and even in this program, I am looking forward to a time where the women of Tum will be heard and assisted in politics.”

“Education is the best thing a woman can obtain to go into politics, so women should enroll in school and encourage their children to be educated.”

“Politics is not a dirty game as people think, it is important as this improves the life of a community and makes it easier to ensure the provision of social amenities to the people.”

Reports of CEPWOP activities are available on request.